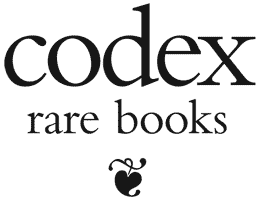 The Fables of Aesop Paraphras'd in Verse, and adorn'd with Sculpture

The Fables of Aesop Paraphras'd in Verse, and adorn'd with Sculpture

To view over 1280 other titles in our continuously-growing catalogue, subscribe to Codex Rare Books today!

"The Fables of Aesop / Paraphras’d in Verse, and adorn’d with Sculpture, / By John Ogilby / London, / Printed by Thomas Warren for Andrew Crook, at the Green Dragon in St. Pauls Church-yard. 1651."

This is one of the most beautifully illustrated English books of the 17th century; the plates are amongst the most famous and celebrated of all suites of illustrations in a literary work. This is also the first important English edition of Aesop after Caxton's of 1484.

“To call these versions paraphrases is misleading. Like ‘The Canterbury Tales’ they are original treatments of familiar themes. Ogilby gives free play to his imagination as he retells the fables with so many amplifications of homely detail and classical allusions that what would ordinarily have been eighty-one pages or a little more becomes two hundred and thirty-six. Uninhibited, his verse varies from fable to fable in line length, rhyme scheme, stanza form, and number of stanzas.”

Ogilby’s treatment of Aesop also leaves no doubt where his sympathies lie in England’s great civil wars of the 1640s and 1650s. Several verses an morals speak of tyrants usurping thrones, of ‘some unseen Aspirer’ seizing power (read Cromwell) and of the general disasters civil strife. In the illustrations, the lion is always presented as a crowned king.

At least three fables make direct allusion to the English Civil War; these are ‘The Parliament of Birds,’ ‘The Rebellion of the Hands and Feet,’ and ‘The Battaile of the Frog and Mouse.’ Not coincidentally, the illustrations to these fables are amongst the most famous of the volume.

The Fables of Aesop are, of course, amongst the most famous and oldest examples of the surviving literature of ancient Greece. They have been used for pedagogy for at least 2500 years and have attained to the greatest popularity in every age. Aesop’s Fables include such immortal tales as ‘The Tortoise and the Hare,” “The Goose that Laid the Golden Eggs,” “The Wolf in Sheep’s Clothing,” and “The Town Mouse and the Country Mouse.”

OF WENCESLAUS HOLLAR, who engraved many of the plates in Ogilby's Aesop.

Václav Hollar (Czech pronunciation; 13 July 1607 – 25 March 1677), was a Bohemian etcher, known in England as Wenceslaus or Wenceslas and in Germany as Wenzel Hollar. He was born in Prague, and died in London, being buried at St Margaret's Church, Westminster.

After his family was ruined by the Sack of Prague in the Thirty Years' War, the young Hollar, who had been destined for the law, determined to become an artist. The earliest of his works that have come down to us are dated 1625 and 1626; they are small plates, and one of them is a copy of a "Virgin and Child" by Dürer, whose influence upon Hollar's work was always great. In 1627 he moved to the region around Stuttgart; before moving to Straßburg, and then, in 1633, to Cologne.

It was in 1636 that he attracted the notice of the famous nobleman and art collector Thomas Howard, 21st Earl of Arundel, then on an embassy to the imperial court. Employed as a draftsman he travelled with Arundel to Vienna and Prague. In 1637 he returned with him to England where he remained in the Earl's household for many years.

Though he became a servant of Lord Arundel, he seems not to have worked exclusively for him, and after the Earl's death in Padua in 1646, earned his living by working for various authors and publishers, which was afterwards his primary means of distribution. In around 1650, probably at the request of Hendrik van der Borcht, he etched a commemorative print done after a design by Cornelius Schut in Arundel's honour and dedicated to his widow, Aletheia. Arundel is seated in melancholy mode on his tomb in front of an obelisk (perhaps commemorating the one he tried to import from Rome), and surrounded by works of art and their personifications.

In 1745, George Vertue paid homage to their association in the vignette he published on page one of his Description of the Works of the Ingenious Delineator and Engraver Wenceslaus Hollar. It featured a bust of Arundel in front of a pyramid, symbolizing immortality, surrounded by illustrated books and the instruments of Hollar's trade.

During his first year in England he created "View of Greenwich", later issued by Peter Stent, the print-seller. Nearly 3 feet (0.9 m) long, he received thirty shillings for the plate, a small fraction of its present value. Afterwards he fixed the price of his work at fourpence an hour, and measured his time by a sand-glass. Lord Arundel left England in 1642, and Hollar passed into the service of the Duke of York, taking with him a wife and two children.

He continued to produce works prolifically throughout the English Civil War, but it adversely affected his income. An etching dated 1643 and epitomizing the civil war, entitled as it is: 'civilis seditio,' features a snake with a head at each end pulling in opposite directions in front of the Giza pyramids and sphinx. Hollar took his setting, presumably symbolizing longer term values, directly from an engraving published in George Sandys' Relation of a Journey begun An. Dom 1610, published in 1615.

During the period of the unrest of the Civil Wars he worked in Antwerp, where he produced many of his most renowned works, including views, his "muffs" and "shells". In 1652 he returned to London, and lived for a time with Faithorne the engraver near Temple Bar.

During the following years many books were published which he illustrated: Ogilby's Aesop, his Virgil, and his Homer, Stapylton's Juvenal, and Dugdale's Warwickshire, St Paul's and Monasticon (part i.). His income fell as booksellers continued to decline his work, and the Court did not purchase his works following the Restoration. During this time he lost his young son, also reputed to have artistic ability, to the plague.

After the Great Fire of London he produced some of his famous "Views of London"; and it may have been the success of these plates which induced the king to send him, in 1668, to Tangier, to draw the town and forts. During his return to England adesperate and successful engagement was fought by his ship, the Mary Rose, under Captain John Kempthorne, against seven Algerine men-of-war,--a battle which Hollar etched for Ogilby's Africa.

He lived eight years after his return, still working for the booksellers, and continuing to produce well-regarded works until his death, for example a large plate of Edinburgh dated 1670. He died in extreme poverty, his last recorded words being a request to the bailiffs that they would not carry away the bed on which he was dying.

Ogilby was born in or near Killemeare (Kirriemuir), Scotland in November 1600. When his father was made a prisoner within the jurisdiction of the King's Bench, presumably for bankruptcy or debt, young John supported the family and used some of the money he earned to buy two lottery tickets, which won him a minor prize. This he used to apprentice himself to a dancing master and to obtain his father's release. By further good management of his finances, he was able to buy himself an early completion of his apprenticeship and set up a dancing school of his own. However, a fall while dancing in a masque lamed him for life and ended this career.

Using contacts made among his high-born clients, Ogilby was eventually taken to Ireland by Thomas Wentworth, 1st Earl of Strafford, on his appointment as lord deputy there, and became tutor to his children. Ogilby then went on to establish Ireland's first theatre, the Werburgh Street Theatre, as a consequence of which he was made deputy-Master of the Revels in 1637. For the four years that the theatre was open it was a great success but it had to be closed as a result of the Irish Rebellion of 1641.

Having narrowly missed being blown up in the castle he was defending, and after being shipwrecked on his homeward journey, Ogilby arrived back in England penniless and without a patron during the closing years of the Civil War. Finding his way on foot to Cambridge, he learned Latin from kindly scholars who had been impressed by his industry. He then ventured to translate Virgil into English verse (1649–1650), which brought him a considerable sum of money. The success of this attempt encouraged Ogilby to learn Greek from David Whitford, who was usher in the school kept by James Shirley the dramatist.

After his return to London in 1650, he married the widow Christian Hunsdon, who had three children by her earlier marriage. In the following year he published the first edition of his politicised The fables of Aesop paraphras'd in verse, and adorn'd with sculpture and illustrated with annotations, illustrated by Francis Cleyn. The next few years were spent in translating and the opening of a publishing business in London. The Restoration of Charles II brought favour back to Ogilby with a commission to help in the arrangements for the coronation in 1660 with the composing of speeches and songs. In that year too he brought out his translation of Homer's Iliad, dedicated to his royal patron. A year later he was again made Master of the Revels in Ireland and he set about the building of a new theatre in Smock Alley, Dublin. The libretto of the musical play Pompey by Katherine Philips, performed at Smock Alley in 1663, credits him as the composer of the tunes.

By 1665 Ogilby had returned to London and published a second, revised edition of The Fables of Aesop, this time illustrated by Wenceslaus Hollar's renowned prints. He had to republish the book in 1668 since his property was destroyed in the Great Fire of 1666, including most of the copies of the 1665 Aesop [it is this 1668 edition that is offered here]. Rebuilding in Whitefriars, he set up a printing press there from which he issued many magnificent books, the most important of which were a series of atlases, with engravings and maps by Hollar and others.

In 1674 Ogilby had been appointed "His Majesty's Cosmographer and Geographic Printer". The Britannia atlas of 1675 set the standard for the road maps that followed. At that period some of the minor roads used the local mile rather than the standard mile of 1760 standard yards which Ogilby adopted in his atlas. One hundred strip road maps are shown, accompanied by a double-sided page of text giving additional advice for the map's use. Another innovation was Ogilby's scale of one inch to the mile (1/63360). These are marked and numbered on each map, the miles further being divided into furlongs. In his 2008 television series Terry Jones claimed that one of the map's purposes was to facilitate a Catholic takeover of the kingdom, an interpretation that one historian agreed was 'significant and highly plausible'.

After the map's publication, Ogilby died in 1676 and was buried at St. Brides, one of Sir Christopher Wren's new London churches.